Report Updates Status and Trends of Renewable Resources on U.S. Forests and Rangelands 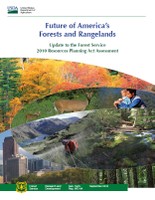 Not surprisingly, a few key issues that influence the sustainability of the nation’s renewable resources are as relevant today as they were at the beginning of the decade: development, climate change, disturbances, and human demand. These themes run throughout the recently published Future of America's Forests and Rangelands: Update to the Forest Service 2010 Resources Planning Act (RPA) Assessment, which provides scientists and managers the latest resource status and trends ahead of the next RPA assessment report due in 2020. Eastern Threat Center research ecologist Kurt Riitters, a longtime contributor to the RPA assessment process, used analyses of post-2010 data to update report sections addressing protected areas and forest fragmentation. “Despite an increase in U.S. forest area, forest fragmentation--especially on private lands--increased between 2001 and 2011,” says Riitters. “Sixteen percent of U.S. lands are protected against human-caused fragmentation to preserve critical ecosystem functions and processes, representing an increase compared to findings from the 2010 RPA report due to better maps and classifications of protected areas.” The RPA assessment report is produced every ten years in response to the 1974 Forest and Rangeland Renewable Resources Planning Act. Learn more…