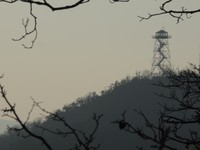 Extreme drought persisted into fall in the Southeast and created the perfect conditions for wildfires to start and spread. Most ignitions were human-caused. Not far from the Eastern Threat Center's Asheville, NC, office, numerous wildfires burned through forest fuels on thousands of parched acres, prompting the governor to declare states of emergency in 25 counties of western North Carolina. “This year stands out as having an unusual, I would even say epic, fire season,” said Center research ecologist Steve Norman, who spoke to a reporter from The Christian Science Monitor exploring the connections between climate and fire in the Southeast. “In some areas, these forests are seeing fires for the first time in decades," he said. "It is a slow process for communities to come to terms with the idea that they are living in a fire prone area." Norman also spoke to a reporter from The Daily Tar Heel about forest health and predicted that fire-adapted, oak-dominated forests are unlikely to be overly impacted by the fires; however, intense smoke and human health may be the most serious concerns in western North Carolina, where the wildfires triggered "code red" alerts for air quality. Following the wildfires that devastated nearby Gatlinburg, TN, Science magazine’s “News at a glance” feature reported on Norman’s recent analysis of fall fires on federal lands from 1970 to the present. Norman discovered that past fall fire seasons in Tennessee, North Carolina, South Carolina, and Georgia didn’t hold a candle to this most recent season: more area burned in 2016 than burned in the prior 45 years combined. Read the articles in The Christian Science Monitor, The Daily Tar Heel, and Science, and visit the photo gallery to view Norman's photos of smoke effects from the wildfires.

Next page » Return to contents