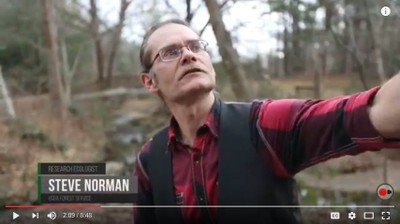 How can researchers and managers ensure the survival of hemlock trees and their associated habitats and benefits to water quality? A new video from Untamed Science examines this question through interviews and footage shot around western North Carolina and eastern Tennessee where the invasive hemlock woolly adelgid has caused extensive damage to these iconic trees. Starring researchers from the Eastern Threat Center, Southern Research Station, and partners from the University of Tennessee, the video features a discussion about the scope of the problem and efforts to save Eastern and Carolina hemlock species through genetic studies and research toward rearing, testing, and releasing predator beetles--all part of a comprehensive conservation and restoration plan. The Untamed Science crew comprises scientists, educators, and filmmakers who strive to create media that make learning about science fun and easy. View the video...

Eastern Threat Center and Southern Research Station staff also collaborated with Untamed Science on an earlier video that explains the threat of invasive species and the challenges and expense of managing them.