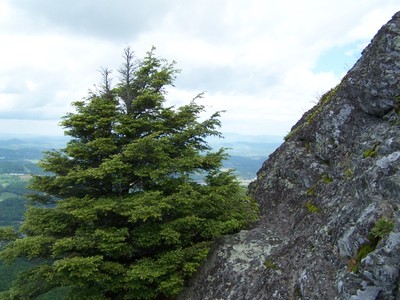 Carolina hemlocks grow in tiny, isolated populations in the southern Appalachian Mountains, most often found in drier, rockier places than the more common eastern hemlocks. The two species--both under attack from the nonnative hemlock woolly adelgid (HWA)--do not typically grow on the same sites and do not hybridize. Part of the conservation strategy for Carolina hemlock is collecting seeds for gene banks, conservation planting, and future restoration efforts. A research team led by Kevin Potter, a North Carolina State University scientist cooperating with the Eastern Threat Center, wondered if Carolina hemlock’s small population size and its isolation might make the species susceptible to inbreeding and low genetic diversity and therefore an especially urgent target for gene banking efforts. The team conducted the most extensive seed sampling of Carolina hemlock populations to date and published their findings in Tree Genetics & Genomes. “We learned that there are high levels of inbreeding in nearly all of the Carolina hemlock populations,” says Potter. “About half of the genetic differentiation occurred among populations, rather than within. That’s highly unusual for a conifer." Scientists and land managers can apply the study results to target conservation efforts, to prioritize the populations where seed collection is most needed, and to inform HWA-resistant tree breeding programs. Read more in CompassLive...