How Cold Is Too Cold for Redbay Ambrosia Beetles? 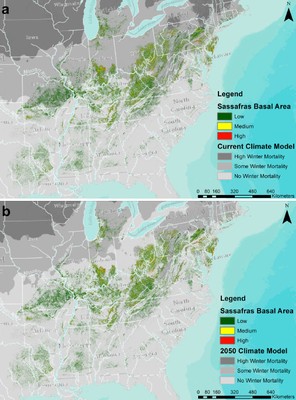 Nonnative redbay ambrosia beetles and the fungus they carry cause laurel wilt--a disease that threatens the entire Lauraceae family of plants in North America, including sassafras which covers the eastern United States and extends into Canada. Currently, only cold temperatures limit the beetles’ establishment and spread to sassafras trees outside the Southeast. For a study published in Biological Invasions, Center research ecologist Frank Koch and partners determined the coldest temperatures the beetles can tolerate and predicted where the beetles could move and survive now and in the future with warming winters. Based on a combination of laboratory and field tests of adult beetles and climate data, results suggest that nearly all sassafras populations are at risk of invasion. “Our models show that redbay ambrosia beetles could become established now in more than 99 percent of present sassafras populations. Just over half of present populations are located in areas where winters are typically cold enough to cause at least some beetle mortality,” says Koch. “In a future with higher winter minimum temperatures, more than 90 percent of the land area with sassafras populations would not experience winter temperatures low enough to kill redbay ambrosia beetles.” Results from this study highlight the need for continued monitoring in anticipation of more widespread laurel wilt mortality in a changing climate. Read more in CompassLive...

Pictured: Maps show the range of sassafras and the invasion potential of redbay ambrosia beetles under current climate (top) and future climate (bottom). Most sassafras will be at risk as beetles spread north and survive through warmer winters. Click to enlarge.