How Will Fish Fare in the North Carolina Piedmont? 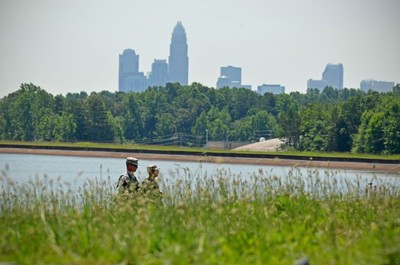 Water withdrawals could be one of the most important factors affecting future fish communities in the fast-growing North Carolina Piedmont, say federal and university scientists who recently published a study in the journal Freshwater Biology. Center scientists Steve McNulty and Ge Sun are among the study's coauthors who projected fish species richness (number of species) under different future scenarios of water withdrawals, land cover, and climate. In addition to using fish data from the NC Division of Water Resources, the scientists used the Water Supply Stress Index (WaSSI) model to predict streamflow characteristics, such as the maximum amount and variability of streamflow, as well as the amount of streamflow originating on parking lots and other impervious surfaces. Results suggest that water withdrawals of 25 percent of natural flow could cause more than three species to disappear. Climate change and increases in impervious cover may not affect fish species richness across the region as a whole, but, in smaller watersheds, increases in impervious cover could also cause more than three fish species to disappear. Water managers can use this modeling approach to identify areas of concern or hotspots where changes in streamflow could threaten fish communities in order to make informed decisions about water conservation. Read more in CompassLive...

Pictured: Increasing water withdrawals in the NC Piedmont, including citites like Charlotte, could impact future fish communities across the region. Photo by North Carolina National Guard.