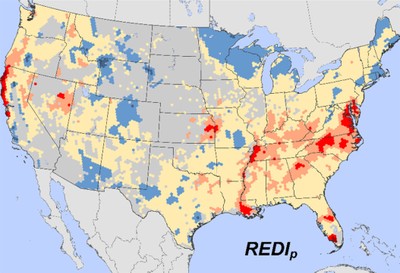 When trees are under threat from a variety of often interacting factors such as insects and disease, climate change, and forest loss, Kevin Potter wondered if efforts to conserve certain species were most effective in protected forests. To find his answer, Potter, a North Carolina State University scientist who cooperates with the Eastern Threat Center, used data from 130,000 Forest Inventory and Analysis plots to assess the rarity and evolutionary distinctiveness (how closely species are related) of 352 North American tree species. He found that rare species occurred in “hotpots” located in California, Florida, central Texas, and parts of the Southwest. Hotspots of evolutionary distinctiveness occurred along the Pacific Coast, the Northern Rocky Mountains, and in scattered locations in the East. Across the nation, conservation has been more successful for distinct species as well as species that are both distinct and rare in protected areas managed for multiple uses (like national forests) compared to protected areas with restricted use (such as national parks and wildlife refuges). Species rarity and combined species rarity and evolutionary distinctiveness are both higher in unprotected areas across much of the nation; exceptions were found in the South, where protected areas better conserved these species. The study’s results, published in Biological Conservation, highlight areas that should be prioritized for conservation efforts to assist managers who must decide where to devote limited resources. Read more in CompassLive…

Pictured: A map shows hotspots of tree species that are both rare and evolutionarily distinct depicted in shades of red. Click to enlarge.