Assessing the vulnerability of tree species to insect and disease threats 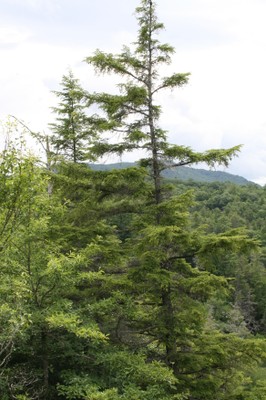 Diseases and insects, particularly those that are non-native and invasive, may pose the most destructive threat to North American forests. Tree species, however, differ in important traits which could drive varying responses to these threats. A team of researchers including Threat Center collaborator Kevin Potter at North Carolina State University implemented a national framework to prioritize forest tree species for conservation, management and monitoring in the face of insect and disease threats. They first compiled a list of the most serious insect and disease threats for native tree species, and assigned a severity rating for each combination between tree hosts and disease agents. They then combined this list with trait data for each tree species as part of the Project CAPTURE priority-setting framework (Conservation Assessment and Prioritization of Forest Trees Under Risk of Extirpation). Data-driven and guided by expert opinion, CAPTURE groups species into vulnerability classes that may require different management and conservation strategies. This effort identified 15 species which require the most immediate conservation intervention, as well as many others that could be targets for less urgent management actions. Outside the US, a European organization has begun to explore the use of CAPTURE for prioritizing European tree species for conservation. The European Forest Genetic Resources Programme (EUFORGEN) is an organization of 27 countries that promotes the conservation and sustainable use of forest genetic resources as a part of sustainable forest management across Europe. Read more about this research here, and about the European effort here.

Pictured: Carolina hemlock (Tsuga caroliniana) tree at Linville Gorge, North Carolina. Carolina hemlock rates as one of the most vulnerable native tree species in the US. Photo by Kevin Potter.

For the latest up-to-date ag webinars on all things agriculture, visit the Agriculture Webinars Portal