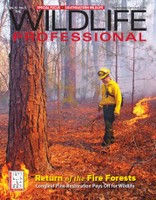 The Wildlife Society (TWS) is an international organization whose mission is to inspire, empower, and enable its 10,000 members to sustain wildlife through science-based management and conservation -- members like Eastern Threat Center biological scientist Serra Hoagland, who has been active with TWS since 2010 when she served as President of a student chapter she launched at the University of California, Santa Barbara. Hoagland recently received her PhD from Northern Arizona University, and as a Forest Service researcher, Southern Research Station co-point of contact for tribal relations, and TWS member involved with the Native People’s Wildlife Working Group, she is also helping others pursue careers in the wildlife field. TWS recognizes her as a 'rising star' in an article in the September/October issue of The Wildlife Professional magazine that highlights Hoagland's early wildlife experiences, education and career path, research assessing Mexican spotted owl populations and habitat, role as mentor, and passion for connecting tribal knowledge and wildlife science. Read the article...