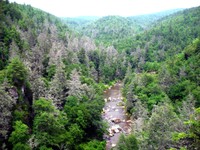 *Norman's photos of hemlock woolly adelgid-killed trees are also featured inside and on the cover of the November 2016 issue of the Journal of Forestry.