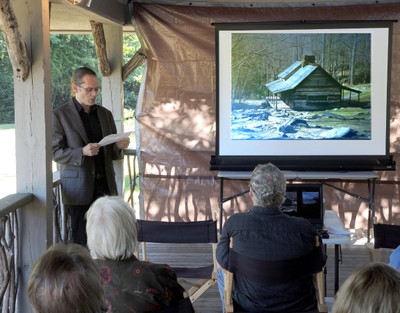 Wildfires burned within about ten miles of the village of Cashiers in southwestern North Carolina in fall 2016. The proximity and drifting smoke were eye-opening reminders about fire’s role in the landscape for this small community surrounded by the Nantahala National Forest. As part of a public lecture series, Eastern Threat Center research ecologist Steve Norman spoke to a group of Cashiers residents and other interested individuals about the region’s past fire-climate relationships. He also discussed the unique drought conditions in fall 2016 that contributed to an epic fire season in the Southeast and how fire hazards change with fuels and extreme weather across seasons and from year to year. “Cashiers and the extensive nearby forestland are especially rich in terms of biodiversity, but the area has also seen its share of development in areas that are fire-prone, heightening concerns about community preparedness in the event of wildfire,” says Norman. Southern Research Station research ecologist Katie Greenberg, Josh Kelly (MountainTrue), and Laurel Kays (Southwestern NC Resource Conservation & Development Council) also spoke to the group about aspects of the region’s fire risks and post-fire ecological responses.

Earlier this year, Norman served as a subject matter expert during a panel discussion on fire ecology, weather, management, and planning. More recently, he gave a guest lecture on "Southern Appalachian Fire Regimes as a Cultural-Climate Phenomenon" to students and faculty in the Department of Biology at Western Carolina University.

Pictured: Steve Norman reads a historical account of an extreme fall wildfire season that occurred in the region during the early 20th century. Photo by Patty Matteson, U.S. Forest Service.