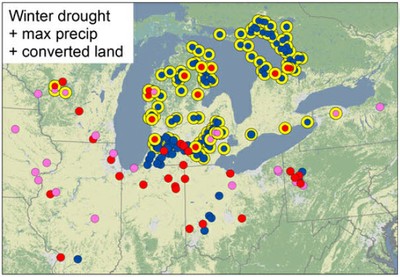 The eastern massasauga is the Midwest’s only rattlesnake, and scientists and managers are in a race to save it. The “swamp rattler,” as it is also known, lives in isolated wet areas such as bogs and fens, but development and agriculture have eliminated important habitat, as has a lack of management necessary to maintain the semi-open vegetation the snake requires. While most populations are on protected land today, historically the snake has also suffered from direct persecution by people who feared it, even including state bounties. And now the snake faces an uncertain future with the added threat of climate change, which is expected to make remaining habitat less suitable due to increasing risks of both drought and flood conditions. In an article for its “Our Stories” series, the Natural Resources Defense Council (NRDC) highlights the snake’s recent listing under the US Endangered Species Act and efforts to conserve it, including research by Center ecologist Lars Pomara that assessed the species' vulnerability to climate change. Pomara and colleagues at the University of Wisconsin-Madison found that populations in the southern and western parts of the eastern massasauga’s range are the most vulnerable to climate change and that management activities undertaken sooner will be far more effective than delayed actions—findings that can help planners and managers develop conservation strategies for these populations in particular. Read the NRDC article…

Pictured: Pomara's study used spatially explicit demographic models to assess impacts of climate variability and land use on eastern massasauga populations between 1950 and 2008. A map shows extirpated and nearly extirpated populations in red and pink and larger populations in blue. Populations historically less exposed to climate and land conversion stressors are highlighted yellow. Click to enlarge.