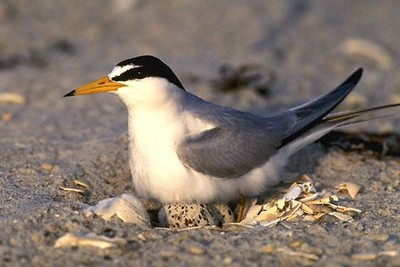 Least terns nest on sand along the Missouri and Mississippi Rivers and some of their tributaries, as well as coastal areas in the United States. Monitoring of the species began after the U.S. interior population was federally listed as an endangered species in 1985. “In the Missouri River basin, least terns were impacted when natural sandbars and habitat connectivity were lost due to development of large dams and reservoirs,” says Forest Service scientist Monica Schwalbach, lead author of a study that sheds light on the birds’ capacity to adapt to changes in their environment. Schwalbach conducted surveys on the Cheyenne River (a tributary of the Missouri River) in South Dakota over a 29-year period, and used this information to evaluate the relationship of this small population with the least tern population nesting along adjacent Oahe Reservoir on the Missouri River. Schwalbach and research collaborators, including Center scientists Lars Pomara and Bill Christie, wanted to know if birds on the river and reservoir might move between the two areas in response to fluctuating water levels. As it turns out, they likely do. The study, especially if combined with more extensive monitoring of individual birds, can help managers better understand the dynamics among least tern populations across the species range. Read more in CompassLive...