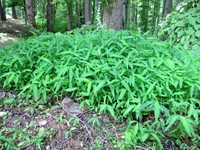 Recent research indicates that invasive plants can be found in nearly half of the forests of the eastern United States, raising concerns about the sustainability of these ecosystems and the benefits and services they provide. The good news is that some eastern forests seem to have a natural, biotic ability to resist invasion. To understand why, a team of U.S. Forest Service and university researchers, including Center cooperating scientist Kevin Potter and research ecologist Qinfeng Guo, looked for clues within “big data” from the Forest Inventory and Analysis (FIA) program. Their findings, recently published in Landscape Ecology, suggest that live tree biomass and evolutionary relationships among tree species are key factors for invasion resistance. Researchers also reported that greater evidence of invasion resistance emerged in patterns seen in some forests of the Upper Midwest and in and around the Appalachian Mountains. Read more in CompassLive...