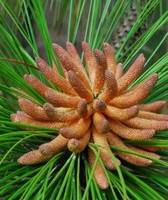 Longleaf pine ecosystems once covered an estimated 80 to 90 million acres across the southeastern United States, but by 1995 populations declined due to timber harvesting, land use change, and fire suppression, with only about 2.4 million acres remaining. Natural regeneration is challenging because longleaf pine trees produce seeds sporadically (it can take almost 3 years for a mature longleaf pine to produce viable seeds), and many factors can adversely impact cone and seed development. Eastern Threat Center research ecologist Qinfeng Guo and colleagues explored cone production on six study sites across the Southeast, as well as the relationships between cone production and local climate. They detected shifts to a new pattern of cone production at five of the six sites and found that the complex patterns of cone production were highly correlated to air temperature and precipitation. “Our results indicate that in general, past climate fluctuations have not affected the relationship between climate and cone production,” says Guo. “Whether this relationship will persist under the increasingly rapid rates of climate change is unknown.” Read more in CompassLive...