The agreement is one of the first of its kind in the nation, and is supported by research demonstrating that traditionally harvesting the young leaves of sochan at moderate rates does not harm plants; instead it stimulates more vigorous growth and leads to increased flower and seed production. In order to communicate the traditional ecological knowledge and sustainability of plant gathering practices necessary for the agreement, the EBCI has been partnering with scientists, including Forest Service biologist Michelle Baumflek of the Southern Research Station's Eastern Forest Environmental Threat Assessment Center (EFETAC). Dr. Baumflek conducted interviews with community members about sochan harvesting, contributed to the development and testing of a sochan monitoring protocol and to the identification of potential gathering sites within the park. Research conducted in partnership with tribes on the multiple dimensions of harvesting sustainability is crucial as federal agencies begin to incorporate traditional ecological knowledge (TEK) into management decisions.  Read more about the historic collecting agreement in the Citizen Times...

The award recognizes individuals whose thinking and writing have helped to shape the field of landscape ecology and is the highest honor bestowed by the society. Riitters is a past president of US-IALE (2012–2014). (In 2019 the US chapter of IALE transitioned to IALE-NA with Canada and Mexico). He commented, "I am honored to be recognized as a Distinguished Landscape Ecologist, and very pleased to know that my research has made important contributions to the science of landscape ecology." He has authored more than 85 peer-reviewed journal articles, 100+ Forest Service and other agency reports, book chapters, etc., and his work has appeared in many environmental reports including the Millennium Assessment, the Official Atlas of the United States, and the State of the Nation's Ecosystems. The IALE-NA fosters landscape ecology in North America and promotes interdisciplinary research and communication among scientists, planners, and other professionals concerned with landscape ecology. Read More about Dr. Riitter's award at the IALE-NA website...

Each year the Director of the USDA Forest Service's Southern Research Station recognizes achievement across the Station with Director's Awards. This year EFETAC scientists and staff were honored to receive several awards in recognition of science innovation and leadership. Research Ecologist Qinfeng Guo received the 2018/19 Southern Research Station Director’s Distinguished Scientist Award “For exceptional, sustained research productivity and leadership in invasive species research including the development and application of a species trait database and a practical restoration guide for invasive species management in changing environments.” 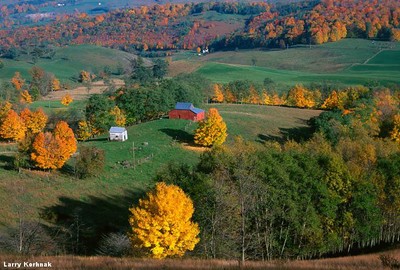 To understand the effects of landscape patterns, one first must know how to measure these patterns. The state of this science – landscape pattern analysis – is assessed in a new special issue of the journal Landscape Ecology. The ecology and sustainability of any landscape are influenced by the types and arrangement of people and ecosystems found within it. As landscapes change, measuring changes in these patterns is crucial for natural resource management, planning, and conservation applications. For this reason, developing the best methods for pattern measurement is a central research topic in the field of landscape ecology.

The issue reflects two parallel, complementary approaches in the development of landscape pattern measurement – the search for general methods that can be applied to a wide range of studies, and the search for specific methods tailored to a certain place or type of landscape change. Both of these methods in tandem will be important for comprehensive monitoring of landscapes. Scientists and land managers have access to more maps of the earth’s resources and at a faster rate than ever before; developing the best methods for analyzing them and monitoring change is a key role for landscape ecologists to play in ensuring that information can be understood and used.

Read the special issue's introductory editorial by Costanza and co-editors Jim Wickham, Kurt Ritters, and Peter Vogt: Describing and analyzing landscape patterns: where are we now, and where are we going?

Pictured: Managing landscapes requires measuring patterns that are relevant to many ecological processes. The diverse patterns evident in this landscape can be measured in a variety of ways to inform land managers. Photo by Larry Korhnak
Annual Forest Health Monitoring publications are now more accessible than ever in new, dynamic web pages

The only national summary of forest health undertaken on an annual basis is now more accessible than ever, thanks to fully re-designed web pages of the U.S. Forest Service Forest Health Monitoring (FHM) program. Annual summaries of forest health are key to our understanding of forest change over short and long time frames, say the editors and authors of “Forest Health Monitoring: National Status, Trends, and Analysis 2017”—the seventeenth such summary in a series sponsored by and published by the Southern Research Station. The entire series is now available to be browsed, searched and downloaded by year, topic, or chapter, along with highlights and additional resources.

Scientists from across the Forest Service as well as university researchers, state partners, and many other experts contribute to the report. Kevin Potter, who co-edits the series with fellow North Carolina State University scientist and Threat Center cooperator Barb Conkling, describes the state of U.S. forests as “troubling.” “We have a great deal of forest in the United States, and much of it is in good shape,” he says. “At the same time, fires, insects and diseases, and droughts are impacting forest health in many places, and some of those forests may be altered permanently.”

The paper “Divergence of species responses to climate change,” coauthored by Kevin Potter, a North Carolina State University scientist cooperating with the Eastern Threat Center, has been awarded the 2019 W.S. Cooper Award by the Ecological Society of America.

The award is given annually to an outstanding publication in the field of geobotany, physiographic ecology, plant succession, or the distribution of plants along environmental gradients. Potter and colleagues from Purdue University and the Southern Research Station analyzed extensive data on 86 tree species in the eastern United States and found that most trees have been shifting their ranges westward or northward in response to temperature and precipitation changes.Their results were published in the May 2017 issue of Science Advances. The paper was also ranked number 59 on the list of top science stories in 2018 by Discover magazine. Check out the announcement from the Ecological Society of America, the article in Discover magazine, and learn more about this study of tree range shifts.